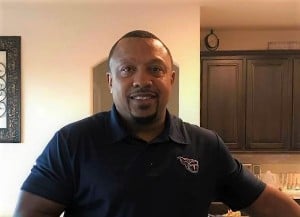 When James Majors ended his military career, he chose a line of work serving students. Then, he became one again.

"Earning a bachelor's degree was always something that I wanted to do," he said. "When I started my current role, I saw that there were some reputable schools online, which appealed to me.

"Plus, there was tuition reimbursement from my employer. I said, 'Let's get it done.'"

Majors works for a Dallas-based company in the higher education space. He graduated from the online Bachelor of Science in Strategic Communication with Social Media Management Certification program at Arkansas State University (A-State) in 2020.

"I wanted to understand more about what goes on with the marketing side of my job, which might be an interest for me later on," he said. "I liked the program. I knew I wanted to improve my communication skills. At the time, I was managing a strategic enrollment team. I created a lot of the messaging.

"Another big selling point for the program at A-State was the cost. It helped me a lot. I am now an enrollment manager for undergraduate degrees, so that experience also helps me explain the viewpoint of a student to my team."

"It was manageable," he said. "In most instances, I had until Sunday to get assignments turned in. I would look at the calendar on Monday, when I got the assignment, and then make milestones I wanted to hit to get done on time. There was a lot of flexibility."

Majors was born in Nashville and raised in San Antonio. He enlisted in the U.S. Army in January 1993. Six years later, he graduated from the Community College of the Air Force with an associate degree in criminal justice.

"I was an MP (military policeman) with a working dog handler specialty," he said. "I worked patrol with drug-detection dogs and explosive-detection dogs.

"At the end of my military career, I was the MWD (military working dog) Career Management NCO (non-commissioned officer) for the United States Army Military Police School. I spent time in Korea, Haiti and Germany. It was always one of my childhood dreams to join the Army. It was a good experience."

After separating from the military in 2005, Majors found his civilian niche as an admissions representative at PCI Health Training Center in Dallas.

"I enjoyed talking to students and helping them reach a dream," he said. "I'd like to someday move to a director-level position within my company."

The online B.S. in Strategic Communication program provided Majors with fresh insights into an area of higher education he had only touched on previously in his experience.

"I liked the Social Media Measurement course a lot," he said. "We did scenarios where we measured the effectiveness of different campaigns that we ran.

"When I am in marketing meetings now, I am more versed on what they are talking about. That course especially broadened my viewpoint."

Majors received a lot of encouragement from his family, friends and colleagues during his time in the online bachelor's degree program at A-State.

"My wife was super excited," he said. "I inspired a few of my team members, as well. I proved to them that earning a degree online while working full time is doable."

Based on his experience, Majors offers some advice to anyone who may be considering A-State's online B.S. in Strategic Communication with a Social Media Management Certification program.

"You should prepare for math in this program. Knock out the general education courses before you get to your core courses," he said. With the gen ed courses out of the way, he found himself enjoying the core courses more.

The experience of earning a degree online was so good for Majors that he enrolled in a Master of Business Administration program at Pittsburg State University. He is on track to graduate in December 2022.

"I got good value out of the program at Arkansas State," he said. "It made me want to continue my higher education online, as well. It was a great experience. I'm glad I did it."